Become a patron of his art

J met a wonderful woman in 1997 and they soon became good friends.  Her name is Anne Abernathy, or better known as Grandma Luge.  She is an athlete from the United States Virgin Islands and is the oldest female to compete in the Winter Olympics. The 2006 Winter Olympics was her sixth.  She hired J to design something for the bottom of her luge.  This is the image he created.  It was featured on an IBM ad during the Olympics.  For the next couple of Olympics J created images for Anne and the Virgin Island Winter Olympic Team.  She is training for the 2020 Summer Olympics as an archer.

You can see the IBM commercial for the Nagano 1998 Olympics.  See if you can spot her logo that J created for her ... CLICK HERE!

Here's J with his friends, Jimmy Buffett, Raliegh Warner (the mastermind that pushed it through the Virginia Congress.) and his daughter.  It was an amazing evening.  They presented Jimmy with his very own plate.  He then went on stage and said, "You can have a real license to chill in Virginia!"  The crowd cheers and J could be found with a big smile from ear to ear.  Listen to Jimmy Buffet's announcement below. 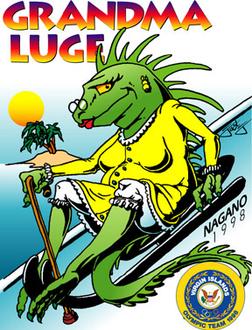